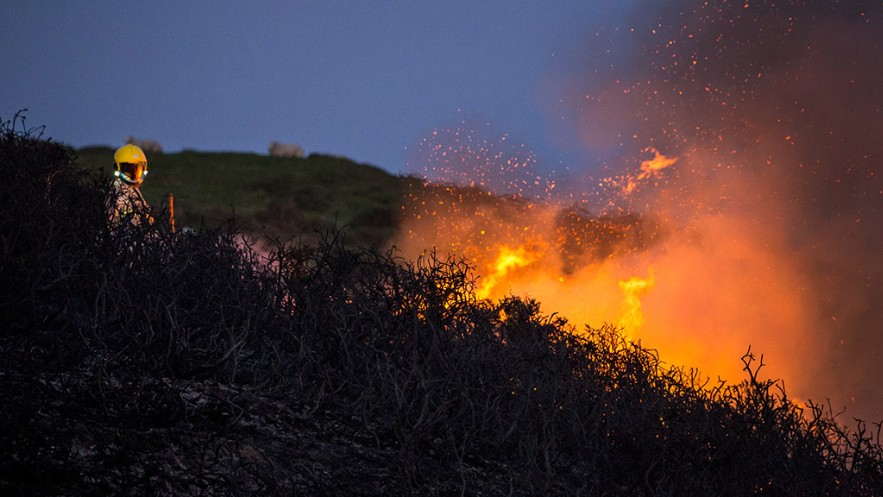 “The climate crisis will force us to deal with a higher risk of fires”, explained Míriam Arenas, researcher at Care and Preparedness in the Network Society (CareNet) from the UOC’s Internet Interdisciplinary Institute (IN3). The UOC is taking part in PyroLife, an international project that aims to train experts to bring about a change in forest fire management, actively involving citizens, including the most vulnerable communities, in all its stages, starting with prevention. The initiative allows for an exchange of knowledge between the people of northern Europe, who have more experience handling floods, and their southern European neighbours, whose land is more prone to forest fires. Also bringing knowledge to the table are Canada, the United States and New Zealand.

The project hopes to raise awareness of the importance of proper forest area management in minimizing the risk of raging widespread fires. “Depopulation is another factor that negatively affects forest management, and we mustn’t focus solely on extinction”, highlighted the research team. The UOC’s involvement in the project, led by Arenas and Israel Rodríguez-Giralt, will address the need for inclusive risk communication with citizens and community outreach in managing fires. “It’s important to get citizens involved in managing forest fires; to take advantage of their prior knowledge and experiences during and after an emergency”, Rodríguez-Giralt stated. With the assistance of two doctoral students, the UOC will analyse effective fire risk communication strategies to reach groups in situations of vulnerability, such as people with disabilities, the poor, immigrants, the elderly and indigenous populations, and will compare the best practices implemented in the United States, New Zealand and Europe regarding how to tailor communication to specific targets. Additionally, the UOC will put together a list of guidelines for assessing the efficiency and viability of risk communication plans focusing on younger generations.

The UOC researchers will also analyse effective strategies for involving at-risk communities in preparing against fires, especially those identified in the Sendai Framework for Disaster Risk Reduction (2015–2030) endorsed by the UN at the World Conference on Disaster Risk Reduction held in Sendai, Japan. “Social preparation requires more effective commitment on behalf of the community, especially from the most vulnerable. We want to learn from the initiatives driven across Europe, the United States, Canada, South Africa, Chile and New Zealand in order to hold participative workshops with at-risk communities, taking into consideration the participants’ age, gender, culture, and rural or urban background”, Míriam Arenas laid out. The UOC research group is backed by a previous European project called Cultures of Disaster Resilience among children and young people (CUIDAR).

PyroLife has a budget worth over four million euros and has gathered experts from 21 organizations across 14 countries, including the FAO and the UN, as well as specialized institutes, universities, governments, fire brigades, companies and associations involved in forest fire management. The project is committed to fostering greater diversity, gender equality and inclusion among its professionals, given the highly masculinized nature of the sector. It is coordinated by Wageningen University & Research in the Netherlands and, apart from the UOC, relies on participation from the Pau Costa Foundation and the Spanish company Tecnosylva; the University of Birmingham, Imperial College London, Forestry Commission England, Wildfire TacAd and Arup in the United Kingdom; Germany’s European Forest Institute; European University Cyprus; the University of Trás-os-Montes and Alto Douro, and Águas de Portugal Serviços in Portugal; France’s National Research Institute of Science and Technology for Environment and Agriculture (Irstea); Frederiksborg Fire & Rescue Service in Denmark; Instytut Techniki Budowlanej in Poland; Greece’s Hellenic Agricultural Organization “Demeter”; the National Fire Protection Association in the United States; the University of Alberta in Canada; the New Zealand Forest Research Institute Limited; the Food and Agriculture Organization of the United Nations (FAO), and the UN.

PyroLife receives European Commission funding through the Innovative Training Networks (ITN), a Marie Skłodowska-Curie action initiative within the Horizon 2020 framework programme. The aim is to train a new generation of creative, innovative researchers who are able to convert knowledge and ideas into products and services for economic and social benefit in the European Union. PyroLife was awarded funding after a call in which only 8% of the projects that were presented received approval.