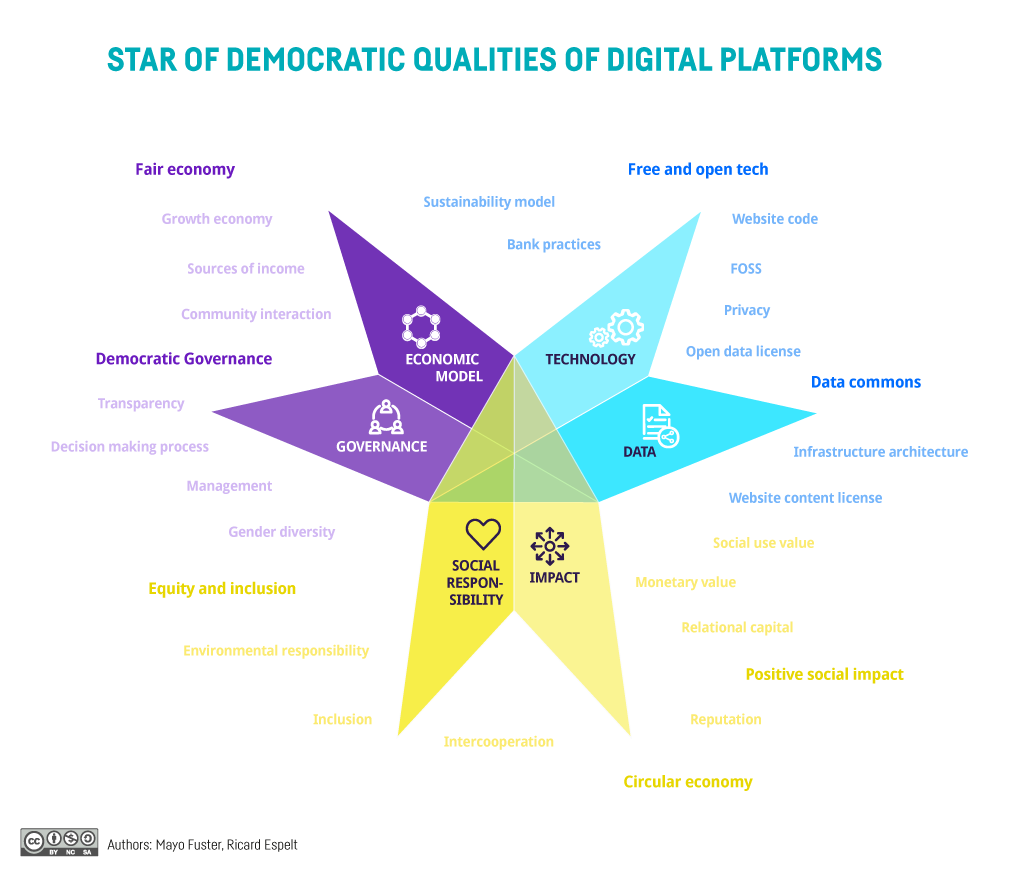 In the internet age, the digital platform boom has become a double-edged sword. Although the majority of these online initiatives promote themselves as projects committed to a more collaborative society, in practice not all of them actually work like this. So how do you differentiate the initiatives that promote cooperation from those that are aimed at making a profit? Researchers with the Digital Commons (Dimmons) research group, at the Universitat Oberta de Catalunya (UOC), suggest the use of an analytical tool that helps display the democratic qualities of the initiatives and provides information about their sustainability from a range of perspectives.

The tool, known as Sharing Star, is a resource that allows us to study and characterize the different types of collaborative economy digital initiatives. By using it, the experts highlight six keys to classify digital platforms: the governance, economic model, technology policies, data, social responsibility and impact of these initiatives. "We need an adequate understanding and a tool to distinguish the various platform economy models, their potential political implications and their effects, to be able to contribute to informing on suitable policies, rolling out agents on the ground and fostering technological development", argued Mayo Fuster Morell, author of the proposal and director of the Dimmons research group into socio-economic innovation at the UOC's Internet Interdisciplinary Institute (IN3).

The experts explain that, although it is true to say that digital platforms have grown exponentially in recent decades, there is still scant critical vision of the phenomenon. "Digital platforms have something that binds them all, which is that they are tools that act as intermediaries between groups of people. They are used as resources for exchanging, sharing and collaborating. From there, we find a very broad range of project types", commented Ricard Espelt, also a Dimmons researcher on the project.

In fact, despite being the most visible, the most widely-known initiatives do not represent the variety of business models currently in existence. Private transport companies Uber and Cabify, for example, would fit into the well-known "unicorn" model, where the aim is to maximize profit. By contrast, platform cooperatives such as Som Mobilitat and Katuma would be among the initiatives that promote collaboration. The Airbnb model, for example, bears no relation to the Fairbnb one; because, although both initiatives are devoted to managing home exchanges, one is based on speculation while the other is based on concepts such as the circular economy and sustainable tourism.

The difference between committing to one or the other, the experts argue, also poses different scenarios of city, future and sustainability. "We need to get a critical and holistic perspective on the development of this type of project and go further", claimed Espelt. The study and classification of the different types of platform presented by Dimmons would, for example, allow us to display the democratic qualities of these projects and, in turn, provide information about their sustainability. In other words, look into issues such as the role played by users on each platform, who is in control of the data and what type of social impact the project has. This perspective would, in turn, enable us to explore new models based on concepts such as platform cooperativism, solidarity economy and the development of open technology.

The future of these initiatives

To date, the most frequent criticisms of these types of platform include the problem that this type of project exploits the value provided by the users for the profit of a small group of people. The managers of Sharing Star argue that this type of reproach would only refer to platforms such as Uber, Cabify and Airbnb, or, in the English-speaking world, TaskRabbit and oDesk, both of them devoted to the connection between companies and freelance professionals. "Companies like Deliveroo or Glovo, for example, were created with the narrative of job flexibility, and in the end, it has been proven that the workers become slaves to the platform's algorithms", Espelt commented.

As a counterpoint to these, the Sharing Cities book collates a number of digital platform initiatives with an impact in Barcelona, such as Goteo (a crowdfunding and matchfunding platform, set up as a charity), Katuma (a cooperative for the consumption of agro-ecological products), Pam a Pam (a platform for promoting responsible consumption), XOBB (a platform to foster inclusion), eReuse (a platform for promoting the reuse of computers and open technology) and Freesound (a sound bank with free contents for students, creators and researchers).

The experts argue that the future of this type of platform means tackling challenges and opportunities that are currently left unfinished. These include the lack of clear regulation of the activity and the confusion, uncertainty and ambiguity posed by these initiatives. It also remains to be seen how the development of these new technologies are integrated with other issues such as technological and economic sustainability, environmental impact, gender and inclusion.